I finally have seen it. After all this time waiting in anticipation, and also a lot of angst that I wasn’t going to like this film, or even enjoy it. I watched Gatsby. Yes, I was right I didn’t like it.

I enjoyed the film, I really did, but I didn’t like it. I decided before I went into the screening that I would try to appreciate it as a film and not compare it to the novel. This was a good decision but it was so hard; having the day before sat an exam on the book. The film was a good film, there were stunning visuals and the props and wardrobe clearly had a never-ending budget because the glamour and the wealth was extravagantly done. The houses were big and the champagne glasses were fuller and I think it really created the atmosphere well. The cars were fast and shiny, freshly made to help belong in the new fast and free world that the new American culture was supposed to offer.

The Great Gatsby and Gatsby

There was also some really impressive acting I thought on behalf of the minor role, particularly George and Myrtle Wilson. George captured that hope of a social climber at the beginning and then the despair and rage that accompanied the death of his wife. Myrtle, although I have to say I really cannot stand her as a character, nor Daisy for that fact, but I thought she was acted well. She was a wannabe wag. Social climber who tried to act the leisure class lifestyle that she wanted. I really did like the juxtaposition of the introductions of both Daisy and Myrtle. They happened one after the other, Daisy elegantly lounging amongst blowing white drapes and Myrtle walking down the stairs with big red hair and lipstick, kissing her sister on the cheek with as much effort as could be. She was as far from the leisure class life as could be, which I liked. Not in a sadistic way, but purely because it was in-keeping with the book.

But some characters really felt so fake and unbelievable that I couldn’t warm to them. Gatsby. I don’t even know where I can begin. The overuse of his catchphrase “Old Sport” in the first few moments he was on-screen bugged me. Yes he says it a lot in the novel. But that was just ridiculous. His accent was also very confusing, it seemed like a mixture of English and American, was he trying for the sophisticated education that he supposedly had in Oxford, whilst also showing his Americanism? I don’t know. I really don’t know how they could possibly think that he would sound good talking like that. What annoyed me most was the Gatsby/DiCaprio hero-worship. There were times when it was difficult to differentiate between the actor and the man he was acting. The moment we are first introduced to Gatsby, he spins around, smile painted across his face, cocktail in hand and fireworks exploding in the background. This would have been a great unveiling of the elusive Mr Gatsby, the man who was possibly second cousin to Kaiser Wilhelm, a Prince, a murderer if it had been done right. Swift and brief and it wouldn’t have been too cheesy. It would have probably even told the audience that this is a great man. But instead we had to wait for the music to crescendo and the fireworks to fade, Nick to get a grip of his grin and DiCaprio to lower his class. It felt like an eternity.

Old sport, why of course fireworks are absolutely necessary. Of course they are.

Nick. Nick Carraway. A failed author who tried to make in the stock business. A man who throughout the novel is not only the narrator to the story, but is also perhaps the one and only decent and real character among the lot: and they send him to a mental institution. This not only horrified but truly saddened me. He was the one figure that I just about liked in the book, and he was turned into a depressive alcoholic, who in order to make himself better, writes down his story; which, you’ve guessed it, becomes The Great Gatsby. The writing out of your story is overused in film in my opinion too, generic and easy way to have a narrator voice-over events as they unfold. I know that in the novel Nick is effectively the author of the events, but he does so from the comfort of his own home, in order to preserve Gatsby’s memory and set the truth straight. Not in the selfish way the film does it.

Sex sells. I know that. I understand that this film has been made for a modern audience and with a modern twist on it, but it felt a bit out of place. The party lifestyle was overdone I felt. The scene at the beginning when Nick is drugged by Myrtle’s sister and then ends in the destruction of pillows, the removal of clothes and the music getting louder just felt unnatural and entirely staged. There is a lack of sex in the book, which has often been criticised by academics as down to Nick’s romantic narrative voice and his aesthetic censorship of the gender politics and the social differences. That doesn’t mean that sex wouldn’t have happened between the characters, I just felt that it was made too prevalent in the film. Too much attention was focused on it. I was a huge fan of the soundtrack as can be seen in my previous post I wrote in the run up to Gatsby’s release and I did like its’ use in the film. But sometimes it just felt too modern. 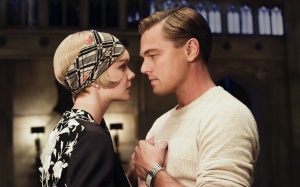 Sex sells, perhaps I am just a prude.

Perhaps The Great Gatsby is just one of those novels that cannot be transferred to screen well. The novel has so many layers to it that it is both dark and light simultaneously, this film focussed mainly on the dark aspects I felt, which is perhaps why it was unlike the novel and why I found it hard to like it. I really wanted to like it and I really tried, but there were just so many things that I couldn’t see through that made it hard for me to do so.